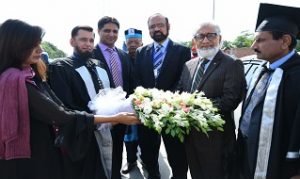 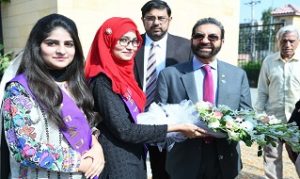 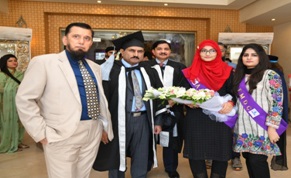 Aziz Fatimah Medical & Dental college was honored to have presence of distinguished guests at its convocation including the respected Board of Governor and CEO of Sitara Chemical Industries, Mian Muhammad Adrees, VC UHS Prof.Dr.JavedAkram , VC FMU Prof. Dr Zafar Ali Choudryand honorable Sarkar(Special guest).With its excellent organization,the event started on time with student procession followed by Academic procession. The program began with the name of Allah followed by Naat. After declaring the convocation opened by VC UHS, a welcome address was given by the worthy Principal.

The Principal Maj. Gen. (R ) Prof. Dr. Hamid Shafiq HI (M) welcomed the audience and gave an overview of the current projects going on in the college for upgradation of the college to University. Also it was mentioned the focus on clinical side. One of the focus areas under his consideration was to improve postgraduate doctors, so that the doctors which the college is producing do their house job as well as post-graduation in the home-hospital with the announced stipend comparable to other institutions.The Principal delightfully mentioned the ‘stars’ of Batch1 and Batch 2 and rendered them with couple of advice to succeed in their professional lives.Principal said that students of our college are also on a sacred mission to fight against different diseases in the community. He was quite hopeful that in future healthy nation will be helpful for making poised society.

The Address was followed byOath taking of the passed out alumni by the Principal and then presentation of the passed students of Batch 1 and Batch 2 by the honorable VC UHS Prof.Dr.JavedAkram. This was followed by conferment and presentation of degrees to each student following the position holders of each batch who were also awarded with scholarships and medals. Among the current students, high achievers were also acknowledged in form of fee waiver in the upcoming year. Similarly, distinction holders were also acknowledged. The excelling departments of the college producing more than 90% of results were also given shields and acknowledgement. 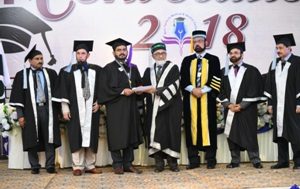 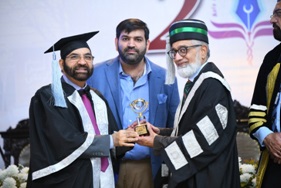 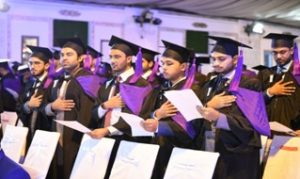 After presentation of degrees and awards, CEO Mian Muhammad Adrees delivered his speech on health profession being very respectable and sacred because it is a source of income and philanthropy also. Later,VC FMU delivered his speech to the audience.He emphasized on providing local support in the city of Faisalabad and also talked about serving the ailing humanity. The VC UHS gave a speech after that in which he emphasized on the importance of female doctors to continue their profession and being strong despite the hostile surrounding around them.He mentioned planning andstart of various postgraduate programs under University of Health Sciences and also offered his full support from the University for the students of AFMDC. Dr. JavedAkramdiscussed that due to less resource it is impossible to provide government educational facilities to all. He also briefed that for increasing the provision of health facilities, all possible supervision from UHS shall be done.

Lastly,SarkarSb.recited Dua-e-Khair for the students and faculty of AFMDC. As a token of thanks, CEO Mian Muhammad Adrees presented a souvenir to the VC UHS and VC FMU. Tokens of thanks were also given to the worthy CEO, Principal, Vice Principal Prof. Dr. Noor Akbar Sial, Dr.GA Sheikh and Sarkar Sb.